Baby terns that were misplaced in the ex-cyclone 🥺 they are enjoying their squid diet though ☺️
These two 😍
‘Twas the night before Christmas
Thankful for friends, family, fitness, and rainbows Happy Thanksgiving y’all

Two weekends ago, I dropped by Moriya to cheer on the ALTs running in the Moriya Half Marathon. Being a runner myself, it was really fun to check out the running scene in Japan and, for the first time, be on the sidelines! Just watching them made me tired, but I managed to snap a few cute pictures of the crew giving it their all. Paul ran the fastest (of the group) at 1 hour 27 minutes… wow. Second place to Greg, third to Becky the Banana. Good work guys!

One of the major differences I noticed was that there was no medal for completion. Not sure if it’s just this race or what, but runners were only rewarded with free yakisoba at the end… which is still pretty cool. Another surprising difference was the lack of females running in the race. I’d say it was about 35% female. If I think about it, that’s actually a large chunk considering I can count on one hand how many times I’ve seen other girls jogging in Japan.

A similarity was the crowd and entertainment. There were taiko drums at the finish line and a few other interesting things along the way (so I’m told). That and many of the runner dressed up for the event. Really great energy! At the finish, many runners turned around and bowed. I found that fascinating.

Here are some pictures from the event:

He raced to the finish

He tried to do a run-by grab of my camera! 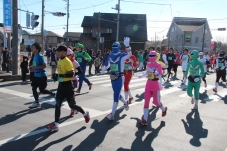 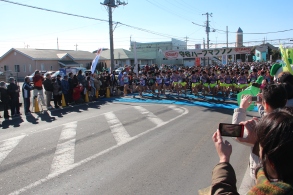 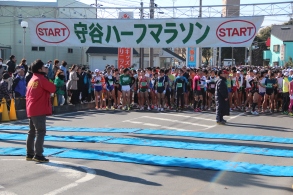 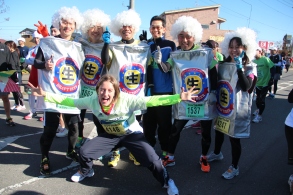