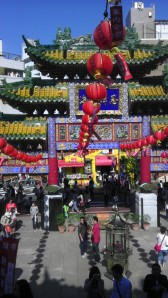 After a rather disappointing day of lessons on Wednesday, I was really looking forward to Golden Week part 2. Carolyn and I were off to an early start on Thursday morning to head into Chiba-ken. The plan was to meet our friends coming from Mito-shi (the capital of Ibaraki-ken) and spend the day seeing some of the historic cities in Chiba-ken. As it turned out, the weather had other plans in mind. It was raining, a lot. About half way there, we get a call to meet in a different city and end up loosing an hour of driving time. We stopped through Moriya-shi to grab our friend Becky (remember Becky?). After a long, rainy drive, we ended up in Kamagaya-shi where we met up with our friends. Thus begins the story of Golden week, part 2.

After much debate, we decided to go to Sweets Paradise. To get there, we had to go to Experia, the shopping plaza in front of Disney Land and Disney Sea. Despite the gloomy weather, there were still tons of people. If you are from Florida, you can compare Experia to downtown Disney. The Japanese love their viking restaurants (we know them to be buffets in the states). Basically, you pay one flat price and you get X amount of minutes to eat whatever you can. The japanese word for this is 食べ放題 (tabehoudai). My very first tabehoudai in Japan was a Sweets Paradise, which is actually a chain restaurant. Truthfully, Sweets Paradises are not known

for their main course items (spaghetti and miso). They are known for their desserts, hence the name. Yea, honestly, it was a dessert buffet. I can die happy now. One friend, Kris, is really big on desserts like me. We were both very, very happy.

Of course it was busy that day, so we waited an hour and a half to get seated, but it was well worth the wait. My favorite dessert was the Sakura Panna Cotta.  Second would have to be a tie between the Matcha (green tea) cake and the strawberry custard pastry thing. I could have spent all day in there. Afterwards, we could barely move, so we decided to head over to LaLaPort. It’s one of the largest shopping malls in Japan, I think after an hour of walking around, we covered about 1/3 of it. I should probably mention that I bought a giant Stitch at the Disney Store that cost about $36. Moving on.

On Friday, we went to Akiba, Shibuya, and Harajuku for some much needed shopping. Akiba was more just for fun. It was crowded as usual, but always worth a visit, even if just for people watching. We went to Don Quijote which has everything you could ever need, from colored contacts to pikachu footie pajamas (adult size). There was also some amazing Matcha mochi (rice dough with cream in the middle) eaten that day too. Shibuya and Harajuku were the usual stops, Forever 21, H&M, Uniqulo, etc.

Saturday was Yokohama! Yoko-san met up with my friends and I around noon and we all went to lunch at this burger joint in Sogo. I ate a taco rice bowl thing. It was weird, but tasty. They had loads of American-style burgers at this particular restaurant. Afterwards, we took a stroll down to the Yokohama Chinatown, which happens to be the largest in the world. Or at least, that’s what I’ve heard. It’s definitely biggest in Japan. While there, we were hunting for a panda hat for our host, Kris. I ended up with a panda fan, to boot. Pretty win, if you ask me. Afterwards we went to Yamashita Park to see the boats and all the people milling around down on the water front. Last, we headed to Yoko’s home for pizza with her and her husband. As usual, she showed us a wonderful time, and I think everyone really enjoyed themselves. I know I did. 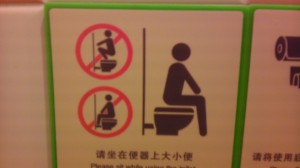 Then there was Saturday night. We rode the trains from Kamagaya into Shibuya and stayed there… until 5am! If you want to drink in Japan, you better plan for a taxi ride or to stay up until the trains restart at 5am. We chose the latter. It was a long night, but we definitely came across some interesting places and had a great time. There was obviously a stop at McDonalds around 3am. Afterwards, we just walked around. There is something enchanting about wandering around a city that’s normally full of busy people in the dead of night. At 4am, the sun began to rise. Yep, you read that correctly. By that time, we had wandered all the way to Harajuku, so we climbed up one of the pedestrian bridges and watched the sun rise over Tokyo. Something I know I will never forget. On the train ride back, we took turns sleeping. I tried to stay awake to watch out the windows as the city was coming to life, but I couldn’t help dozing off from time to time.

Sunday was recovery day. Oh, that and getting caught for parking in the wrong place. Luckily the parking manager was nice and just asked me to move. Well, he had to ask a few times before we could work out what was being said/ got a fellow ALT to translate. Looks like I have more studying to do! From here on out, I should be posting at a regular 2 times a week. Honest! No more breaks until July.