Despite the apparent lack of snow, I decided the Snow Monkey Park in Nagano might be worth a visit. You know those pictures of monkeys bathing in hot springs with snow in their fur? Yea, those are taken at this place. We drove up some pretty windy, random roads in an effort to find this place. As we pulled up to the gates, Kris and I noticed that there was a 500yen fee to even get into the parking area. We debated turning around for about one minute, when, right on cue, a monkey strolls up and sits in the drive. Sold. We pulled our coins out faster than you can say “Nagano Monkey Snow Park.”

Not only are the monkeys great, but the complex is pretty interesting too. There are many old, wooden buildings stacked on top of each other, with a snaking cream-colored river flowing through. Of course, hopefully you are OK with the smell of sulfer.

As Kris and I approached the pre-designated “monkey area,” we already started to see monkeys just hanging around. Each time we freaked out and took out our cameras. As we were going up the path, one came stolling down ever so nonchalantly as we are frantically shooting pictures. The monkeys didn’t care about us in the least.

It actually got the point where I started to become dis-enchanted with all the monkeys. The were everywhere and all within arms reach. Crazy! I’ve never been so close to wild monkeys before! Of course, they didn’t mind us at all. There were all ages of monkeys running every where, causing trouble as they went. The trademark hot springs were there, too, filled with monkeys taking a tip. It was hard to contain my excitement.

My favorite part, by far, was the “monkey keeper” sitting in a rickety little chair wearing the most disinterested look I’ve ever seen on a man that wasn’t in a shopping mall. The monkeys would come up from time to time in an attempt to bother him, and he would promptly shoo them away. Most of them resulted on imitating his bored-posture on the trash bins behind him. 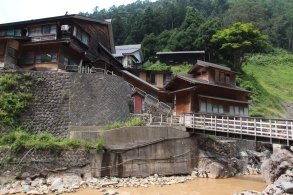 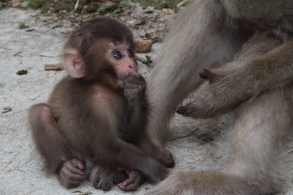