In this picture, it almost looks the same as Magic Kingdom!

Last Thursday, a few local friends and I decided to go out for drinks in Koga. Three glasses of wine and one Melon/vodka mix later I found myself agreeing to go to Tokyo Disneyland the following Saturday. Saying that I am a fan of Disney is quite the understatement. Give me some liquor, and apparently my love for Disney knows no bounds (to my wallet’s dismay).

Drinking parties aside, I have a long history with Disney World. You see, being from Orlando, Florida, I’ve been there more times than I can count. Nearly every weekend, in fact. By the time I was eight or nine, I actually complained about going to Disney. Today, I’m a huge fan and regular Disney goer. This was my first visit to Tokyo Disneyland. 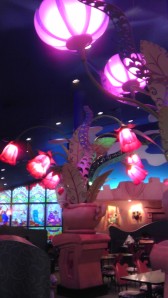 All in all, it was quite fun. My favorite part was shopping because there were so many amazing new goods to check out. That said, the look and feel of TDL is so similar, I even forgot I was in Japan at times. Happily, our group managed to ride all our favorite rides multiple times and enjoy the Summer Festival Show and the Electric Light Parade.

For anyone looking to visit the parks, I would recommend Tokyo Disney Sea over Disneyland simply because it’s an entirely new experience. If you have the time and money, then definitely do both. It’s worth it to see how “Japan does Disney.” Oh, and you can eat curry flavored popcorn. That alone is enough.