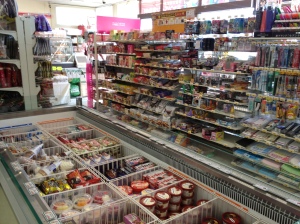 Every time I chat with friends, I always talk about the magical “conbini.” Even in Japanese, the word for convenience store is konbiniansu sutoa but they often shorten this to conbini. In typical Japanglish fashion, we native English speakers have also adopted this fashionably short word. Often, in Japanese, names of stores or restaurants are shortened to just a few syllables. For example: Starbucks becomes staabaa, McDonald’s becomes Makku, and my personal favorite, First Kitchen becomes fahkin (say it out loud).

Suggestive nicknames aside, I thought I would share a few pictures I snuck while perusing a conbini last weekend. On a side note, Japanese iphones are designed to make a sound when you snap a picture, a feature that can’t be turned off. This is because of the alarming number of guys sneaking pictures up girls skirts. Thanks to them, I didn’t make it out of the conbini without a few odd looks as I snapped away.

Conbinis carry just about everything; from ice cream to sushi, from kit kats to chocolate covered chips, from deodorant to dirty magazines. It’s all there. Of all the conbinis I like 7-11 the best, a place I normally avoid like the plague in the states. No time to cook dinner? No problem, there are hundreds of dinner options, fresh or frozen. Out drinking with friends and in need of a late-night meat bun? Please choose from beef, chicken, or pork. Out drinking too late and in need of some overnight stuff? Everything from toothpaste to underwear, it’s there.

When I finally leave Japan, I’m convinced I will go through conbini withdrawal. 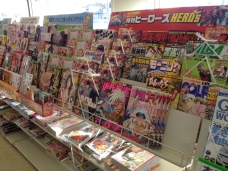 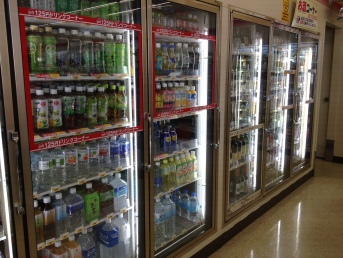 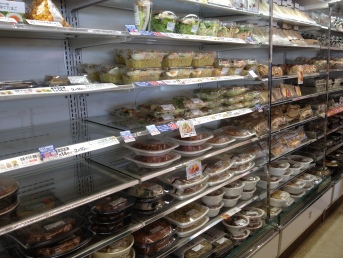 10 thoughts on “The Japanese “Conbini””